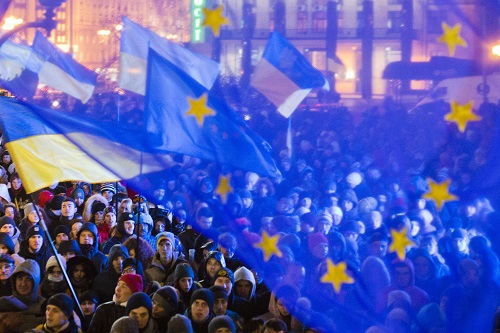 On 3 March 2015, King’s College London held an event about the conflict between the EU’s Eastern Partnership vs. Russia’s Eurasian Union. David Cadier, Fellow in International Strategy and Diplomacy at the London School of Economics (LSE), presented his thoughts on the issue and emphasized the need to move beyond the power-bloc narrative in order to better understand the Ukraine crisis and to reform the European Neighbourhood Policy.

According to Cadier, the Ukraine crisis further underlines the need to reform the European Eastern Partnership (EaP) and to move beyond a geopolitical ‘Russia vs. EU’ perspective regarding the Ukraine crisis. This narrative would not adequately reflect the role of the European Neighbourhood Policy, configuration of the region, domestic interests and Russia’s foreign policy.

For many observers, the Ukraine crisis began with the country’s refusal to sign the association agreement with the EU. After Armenia prioritised economic ties with Russia over the European Union, this was a devastating result for the neighbourhood policy. Accordingly, the situation was quickly seen and interpreted as a conflict resulting from the struggle of two power blocs over the region. But this interpretation is based on certain presumption that seems highly questionable in light of the ENP. It assumes that the ENP provides the ground for the EU to develop a structural power in the sense that it is capable to influence the regional political-economic structure. It is generally right that the ENP is the basis through which the EU tries to influence its neighbour countries in the East and the South. The ENP’s goals are to foster ‘political association and economic integration’ around a body of ‘shared values’ (http://eeas.europa.eu/enp/about-us/index_en.htm).

Nonetheless, this program is everything but a ‘robotic arm of EU structural power, nor a coercive sphere of influence in the region’ (Cadier, 2014).  The EaP is a much more technical and bureaucratic program trying to achieve an economic integration based on cooperation and bilateral agreements.  While the EaP’s approach of regulatory convergence is similar to new member states it fails to provide any incentive for the countries to implement reforms. This procedure stands in stark contrast to any geopolitical dynamics. Due to its focus on technical and regulatory implementation the ENP fails to take Russia’s foreign policy concerns into account.

Arguably the EU did not anticipate any geopolitical relevance of its Eastern Partnership program. According to Thomas de Waal “The EU cast the partnership as a bureaucratic and economic project, without sufficiently mapping out the politics to prepare for certain contingencies”. For Russia, on the other hand, the EaP formed a threat. Russia has, to a certain extent, realised the relevance to promote international norms (Makarychev, 2008). Consequently, the EU as a normative power in its neighbourhood is perceived as a threat. The attempts by Russia to promote its own alternative economic union, the Eurasian union, should also be understood as an attempt to gain new market access after the economic and financial crisis in 2008. For some of the ENP countries this form of economic integration with Russia has a considerable appeal.

Therefore, it is also important that any interpretation of the Ukraine conflict as well as the ENP reform incorporates the local and domestic structures of the region. For a considerable amount of time, Ukraine tried to avoid re-election (Cadier, 20014). The EaP itself does not take such domestic interest structures into account and it is questionable how successful a ‘one size fits all’ policy can be applied to such a diverse region. The ENP was not designed as a clear alternative to membership but as an indefinite, composite, and multidirectional policy that remained ambivalent about its goals, according to Cadir.

Overall, the talk clearly presented the different layers involved in the Ukraine conflict and underlined the necessity to reform the Neighbourhood Policy from a technical, bureaucratic policy towards an effective instrument of European foreign policy.