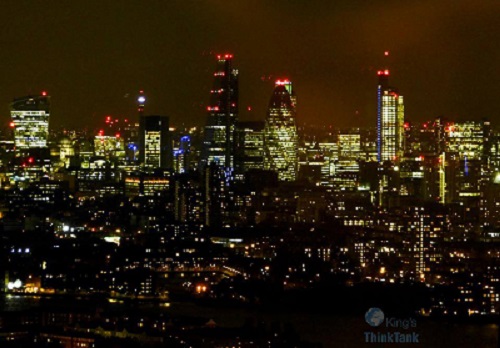 On Wednesday 14 January, King’s Think Tank hosted a special business and economics event on the top floor of the JP Morgan headquarters, in Canary Wharf. Fully booked and overlooking one of the premier views in London, the inaugural event of the second semester welcomed housing experts Scott Corfe, Head of Macroeconomics at the Centre for Business and Economics Research (CEBR) and King’s College London Geography Professor Chris Hammett, to discuss the UK property market.

It was a lively and informative discussion that began with Corfe’s presentation on recent housing market trends and predictions for the coming years, with a focus on London. He showed how house prices have risen significantly since the financial crisis, primarily driven by London.

However, he claimed that we have now just “reached bubble territory” and that this is primarily owing to a few factors such as:

Therefore, he is predicting that house prices will decline this year by 3% in London and 0.6% for the rest of the UK. He stressed that this decrease is not likely to last long and in 2016, house prices should be returning roughly back to the 5% annual increases of the last few years and remain that way for the rest of this decade.

Corfe also expects the upcoming general election to have an impact on the property market. Especially if a Labour government is elected and their contentious ‘mansion tax’ policy on properties of value exceeding £2 million is implemented. He argued that this could limit price growth at the top end of the market, although 96% of the impact would be consigned to London and the South East region, where the UK’s wealth is enormously concentrated.

Professor Hammett presented on ‘The Changing UK Housing Market’. Hammett pointed out that there have been 5 major housing price booms over the last half century, with the most recent one coming to an end just last year. The first occurred in 1971-73, which ended with the OPEC Oil Embargo, closely followed by another boom in the late 1970s. The third was the ‘Lawson Boom’ of the late 1980s, followed by a big slump until 1995. In that year, the ‘Long Boom’ then lasted until the subprime mortgage crisis of autumn 2007, which launched the recent financial crisis.

What is significant amidst the aforementioned booms and changes in the UK housing market is that there has been a long-term upwards trend of roughly 2.5% growth in real terms for house prices, which Professor Hammett believes will not be abating, despite the current price drop. Professor Hammett agreed with Corfe that house prices probably peaked last autumn and that the London market has been significantly pulling away from the rest of the UK.

Hammett’s presentation was followed by a lively Q&A session where many students voiced their concerns over decreasing housing and rental affordability in London and put Corfe on the spot a few times regarding his tendency to favour economic, over more social aspects of housing.

Corfe was against implementing rent controls and did not believe people have the right to live their entire lives in central London. He was also not bothered by Hammett’s claims that buy-to-let schemes were “choking off home ownership” and that home ownership expectations had fallen substantially in the UK, because he claimed that it makes better economic sense to have a mobile workforce.

Professor Hammett was much more sympathetic to the social aspects of housing, believing that the extensive amount of unoccupied top-end housing was “politically embarrassing” and “not good for the health of a city.” Contrary to Corfe, he was in favour of rent controls, pointing to the success of rent control freezes from 1915-1967, which led to a decrease in private renting. Hammett also argued that the government should look into limiting the skyrocketing levels of foreign purchasing of UK housing; as such policies have had great success in Switzerland at making housing affordable for locals.